Okinawa and Jeju: Bases of Discontent

▲ Donald Kirk explores the specter of war on both Jeju and Okinawa. Photo by Darryl Coote
The old Korean proverb "A shrimp caught between two whales" sums up veteran correspondent Donald Kirk's encounters in his book Okinawa and Jeju: Bases of Discontent.

In this brief book in the Palgrave Pivot series, Kirk meets opponents and proponents of the American military bases in Okinawa, Japan, and the South Korean naval base in Jeju, South Korea.

This is a timely review as on Oct 27 a US warship patrolled disputed waters in the South China Sea. The Chinese ambassador to the US responded by calling it "a very serious provocation" and warned against the militarization of the region.

As Kirk outlines in his book, that ship has probably already sailed with China expanding down its nine-dash line and Obama pivoting to Asia.

Jejuans and Okinawans are thus cast in the role of Davids fighting Goliaths, pushed around by the whales of Seoul, Tokyo, Washington, and Beijing. Rather than making their islands safer, they fear they are being placed in the crosshairs of war.

"They are fighting with each other to gain power. This place is in the middle, and if they are in physical conflict, Jeju will not be defended but will be the victim," one Jeju local tells Kirk.

China's designs on the disputed territories of Senkaku, Japan, and Ieodo, Korea, cast shadows over both communities. In Okinawa they say, "If we get rid of the base, China will come," and the same fears fuel support for a base on Jeju.

The book, however, mostly eschews arguments for or against the bases and instead focuses on exchanges with local (and not-so-local) activists, shopkeepers and mandarin farmers.

Although Kirk concedes early on that straight comparisons between the two island regions would be "inherently flawed," the former Vietnam War correspondent identifies some common strands.

The ghosts of 1940s massacres haunt both — the American invasion of 1945 in Okinawa and the April 3rd Massacre of 1947-54 in Jeju — and islanders fear that outsiders will again bring death to their islands.

Outside interference is a common complaint on Jeju: Kirk recounts opponents of the "civilian-military complex port" decrying oppressive police "from the mainland," while base proponents bemoan nuisance activists "from outside Jeju."

Such divisions are apparent throughout the book, with some villagers pragmatically capitalizing on the changes that are idealistically opposed by others.

Although staying mostly neutral, Kirk sometimes lets his guard slip. After seeing one "roly-poly" American jump on a concrete truck, Kirk asks him if he is in Gangjeong "just having fun." Not giving his real name, "Mr. Booyah" denies the accusation.

While protesters in Gangjeong seek to block construction in the most literal fashion, Okinawans wrestle with the relocation of the American Futenma Air Base to Henoko, while also protesting aircraft noise or "unsafe" Osprey aircraft.

Kirk crucially highlights the inner conflicts not only within communities, but also the dissonance that individuals grapple with in facing realities and ideals.

An exchange with an Okinawan store owner, for example, shows her longing for the trade that more GIs would bring, yet also worrying about the pollution that a new base would create.

Despite these personal interactions, we only scratch the surface of their personal lives or the anatomy of the anti-base movement. The Palgrave Pivot series is intended for such depth, however, and a deeper look at anti-base and social movements in Japan and Korea would be a welcome follow-up work.

The book is also heavily weighted toward Okinawa, and by the time we get to Jeju on page 97, there is only enough room for a brief overview of key issues.

It is the little people in the middle who Kirk shows to be mostly pragmatic, weighing up the pros and cons of a fight that is largely out of their hands.

I was reminded of the work of author Thurston Clarke, who describes how islands are rarely the bedfellows of sober reason.

"The longer I waited to discover why islands are so intoxicating, the greater the chance that their undefined and mysterious charms might vanish," writes Clarke in Islomania.

Both the Davids and the Goliaths of Okinawa and Jeju are intoxicated by this charm, and the fear is that one day the great powers of the region will imbibe a little too deeply.

When that happens, it is hard not to feel that the Okinawan shopkeepers and Jeju mandarin farmers will once again be shrimps caught between two whales.

Okinawa and Jeju: Bases of Discontent (2013) by Donald Kirk is published by Palgrave Pivot and is available in Kindle and hardcover editions.
Darren Southcott editor@jejuweekly.com

Yonsei Journal of International Studies, Review by Scott Kardas
"Kirk focuses on the comparison between the two islands rather than an explanation for the military bases. A concentrated approach keeps the book concise and direct. Even though Kirk did not widen the scope of examination, the book points to foreign powers’ interference in local matters as one of the main sources of the problem. Therefore, he maintains a succinct argument within the boundaries of his analysis. Kirk’s comparisons between Okinawa and Jeju are both original and relevant. The research depth and the style of using smaller situations to examine the bigger picture allow the reader to comprehend the situation easily and to form a personal connection. Furthermore, the resounding themes of connect and disconnect intertwined throughout each chapter present a cohesive story. This unique comparison is especially pertinent to the current global power shifts and political situation in East Asia."
Speaking on Jeju and Okinawa
Review, commentary on talk on the book at Johns Hopkins' School of Advanced International Studies

The fear of regional war hangs over these island enclaves -- Okinawa the southernmost prefecture of Japan, Jeju the southernmost province of Korea. Both have suffered unimaginable tragedy, Okinawa in the biggest and last battle of "the Pacific War" in 1945, Jeju in the revolt that broke out in 1948. While people on Okinawa protest the U.S. bases, people on Jeju fear a new base will be a magnet of attack. This book looks at the controversies from all sides, draws intriguing comparisons and looks ahead to a clouded future.

Rev. Mun, leading protest against the naval base on Jeju, works on carving out words of prayer in shelter across from the entrance to the base
Unfortunately, the priest got a little upset about something I wrote.

Protesters outside Jeju naval base

The fence surrounding construction of the base 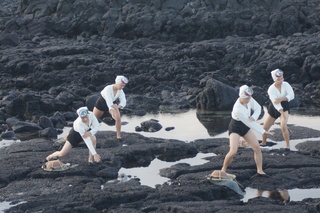 Dancing Ocean, an aquatic ballet performed on east coat of Jeju, venerating the sea goddess, a tribute to the women who dive for shells, expressing the relationship between nature and their work

With Hong Choon-ho, Dongkwang village, survivor of massacre in which her parents died

Chungsoo Village with Dr. Im Ae-duck, professor at Jeju University, with her mother, who survived massacre 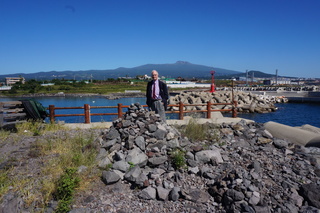 At Tower of Peace on breakwater looking toward site of naval base under construction at Gangjeong village on southern coast of Jeju, Mount Halla, Korea's tallest peak, in background

View of southern coast of Jeju near International Conference Center

Image of Japanese zero, the warplane sent on kamikaze missions, peers from Japanese revetment at Aldreu near southeastern coast of Jeju 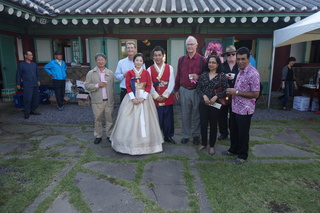 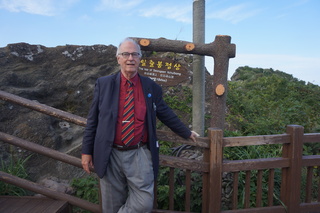 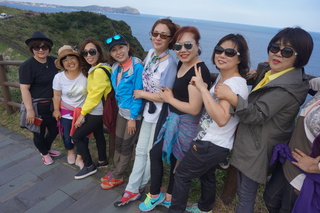