Korean Crisis:
Unraveling of the Miracle in the IMF Era

“Donald Kirk, who has reported extensively on Korea....takes a sweeping view of its political and economic evolution over the past two decades....Kirk dissects the government's inability to reform the huge family-owned conglomerates, the chaebol....Kirk writes vividly and illustrates his story throughout with firsthand reporting....essential reading for anyone interested in understanding the North's negotiating tactics.”

"Korean Crisis goes beyond the traditional purview of a niche academic area, but instead provides a journalistic overview of the changes that have occurred in South Korea from 1997 to 2000, with less attention given to related theoretical underpinnings which may have led to the types of sweeping change that occurred in South Korea during that time."

“The strength of this book is that it brings together in one place the reportage of one of the key foreign journalists based in Seoul during the 1990s. With access to politicians, press releases and Korean and foreign businessmen, Donald Kirk assembles an account which highlights what a tangled mess things were. We see the viewpoint of the people in authority, tempered with interviews with “real” people – a striking Hyundai shipbuilder or a shop assistant at the sharp end of the retail downturn.
We see the negotiations with the IMF, the attempts to stabilise or revitalise the financial sector and the chaebol, often by throwing good money after bad. We witness the tension between the need to bring in foreign capital and expertise, and the familiar strand of nationalism wanting to keep the foreigners out...Kirk’s accounts of events 10 years ago still has repercussions and relevance today.”

“Donald Kirk explores the reasons for Korea’s economic crisis, its aftermath, and its impact on the system that brought it about. He traces a variety of events that constituted the crisis, including a series of scandals at the height of the Korean miracle; the efforts of the one-time dissident Kim Dae Jung as president to curb the overweening power of the chaebol, or conglomerates; and the outside intervention by the IMF and the country’s desperate efforts to obtain foreign investment. At the same time, the book explores another overwhelming problem, that of coming to terms with North Korea, which is suffering from famine but still a threat. Based almost exclusively on the author’s original reporting from the onset of the crisis through the intervention of the IMF, this book is the first to look at Korea’s experience of the regional turmoil in Asia.”

"Following opening chapters which paint a convincing economic and political portrait of Korea on the eve of the crisis, giving the reader a front-row seat of IMF vs. Korea Inc., Kirk zeros in on the main culprits, the chaebol captains and the system they created....Kirk is a perceptive reporter and writer, better at posing core questions than answering them, waxing wistful and poetic rather than clear and analytic. However, for the busy businessman eager to get into the swim of things Korean, this work offers a good overview of some of the concerns of the peninsula -- concerns which are as relevant today as they were in 1998."

“As they entered the millennium, South Korea’s chaebol or conglomerates were at a crossroads. The question was whether these ‘engines of the economic miracle’ had run out of steam or could restructure and modernize for the next stage of Korea’s industrial revolution.”

From that opening, “Korean Crisis” delineates not only the economic crisis but also the pressures of North-South Korean confrontation, the obstacles to lasting peace and Korea’s identity crisis.

The book ends: “For many at the dawn of the millennium, the renaissance of the miracle, like the second coming, would have to wait.”

Amid uncertainty about the country and the region, the drama goes on.

“Donald Kirk is a veteran observer of the Korean scene. He has a talent for blending politics, economics, and culture into a lively story that those interested in the heroic as well as tawdry sides of the ongoing Korean ‘miracle’ won't want to miss.”

“Kirk's sweeping, detailed study chronicles one of the most important economic events of the late 20th century. A veteran journalist in Asia, Kirk shows the local and global causes and consequences of the crisis in the highest levels of the Korean government and in the lives of ordinary working men and women, in the excesses of wealthy corporate leaders and the struggles of money changers in the back alleys. If you are an investor in Asian markets, a student in Asian studies, or anyone interestsed in the history and future of what Koreans now call the "IMF generation," this is a book for you.”

“...a lively study that should be read by anyone interested in the contemporary Korean scene."

“I recommend the book to anyone who wants to read about South Korea's economic crisis and recovery.”

Donald Kirk explores the reasons for South Korea's economic crisis, its aftermath and impact on the system that brought it about.

Kirk traces a variety of events that constituted the crisis, including a series of scandals at the height of the Korean miracle; the efforts of one-time dissident Kim Dae-jung as President to curb the problem of the chaebol or conglomerates; and the intervention by the IMF and the country's desperate efforts to obtain foreign investment.

The book also explores another overwhelming problem - that of coming to terms with North Korea, which was (and still is) suffering from famine and was considered a threat.

This pushed Mr Kim to launch the hectic diplomatic efforts, which resulted in his popular visit to Pyongyang.

The book is based almost exclusively on the author's original reporting - Kirk was reporting for International Herald Tribune from Seoul - from the onset of the crisis and throughout the intervention of the IMF.

Kirk writes that how the South Korean miracle fell apart, then partially came together again forms one of the great dramas of modern Asian history.

'My purpose in writing this book has been to trace the evolution of the crisis, including the struggle of the Government, business and labour to overcome it,' he writes.

The labour trouble has persisted as several chaebol have been sold to foreign companies and workers have been laid off as part of the restructuring.

Well-established international manufacturers such as Samsung Motors, Kia, Hyundai and Daewoo have all suffered as a result of takeovers and mergers.

However, despite all the trouble, South Korea's economy is on the mend and last year its stock market was one of the best performers in Asia.

In Pyongyang, lone figure is seen on a main street leading to Pyongyang station, on right

The madding crowd in Myongdong, one of Seoul's liveliest districts. Click to order online 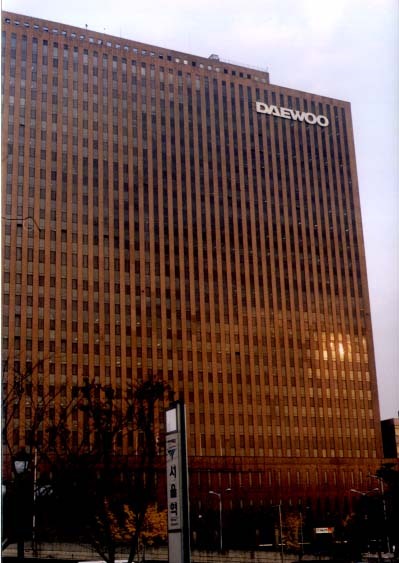 Proud headquarters of once mighty Daewoo Group, which collapsed in 1999 as a result of the economic crisis. 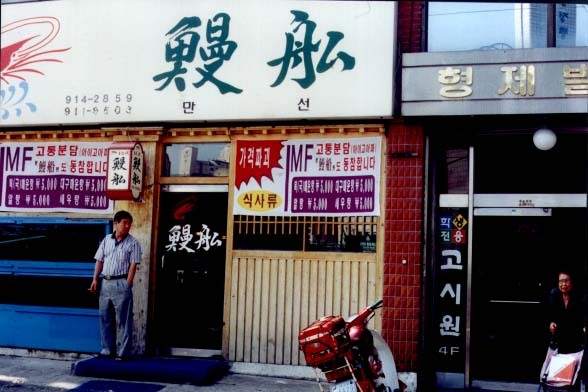 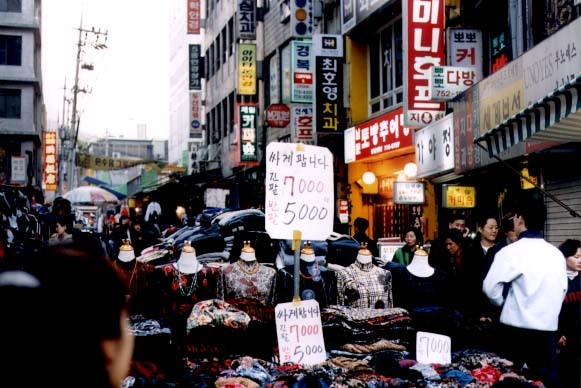 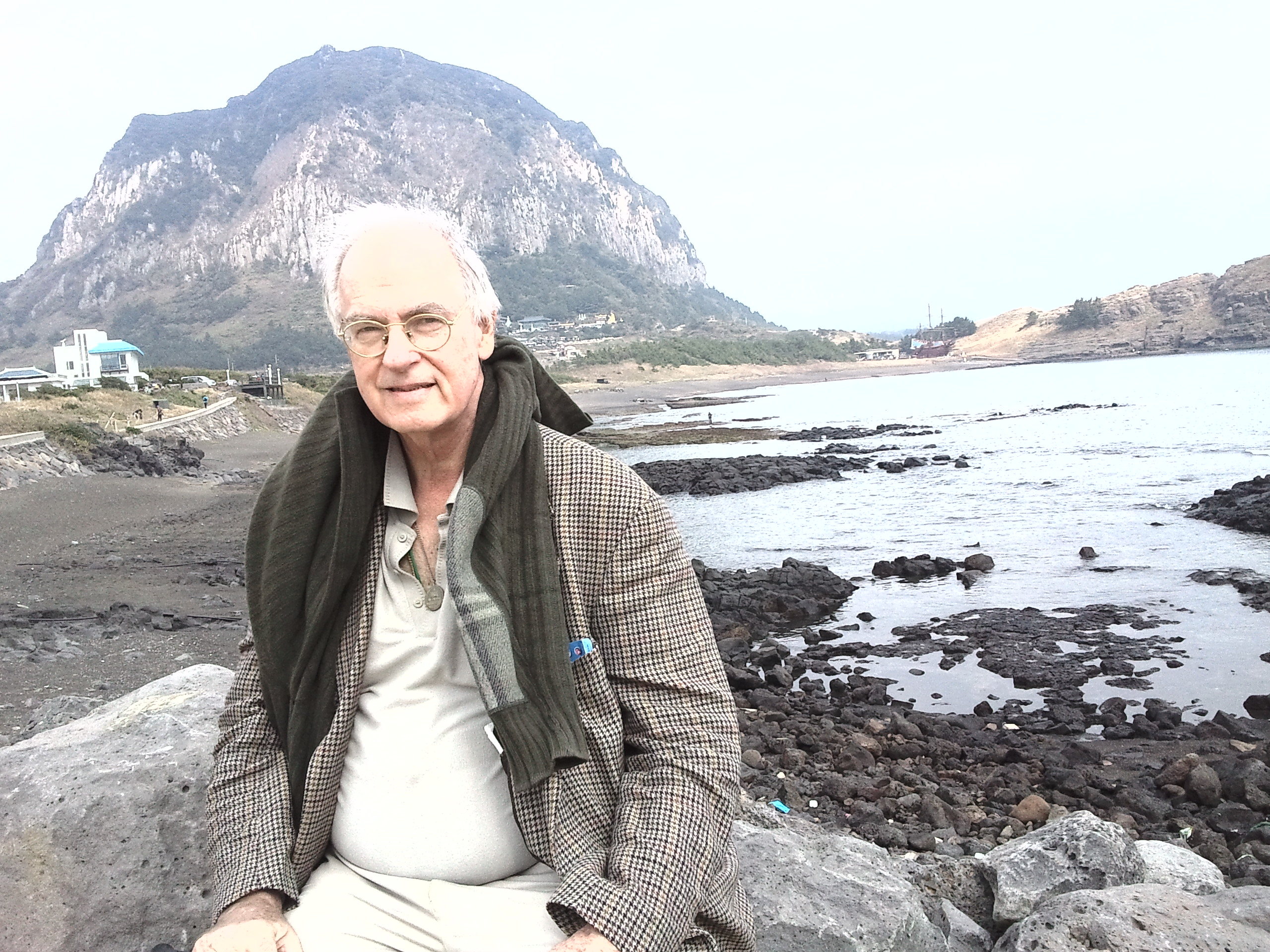 On Jeju, taking a break on a trail through the rocks by the sea