Viewpoint:
Lambs to the Slaughter

She looks about six or seven, but tiny Kim Yun is all of 12 years old. And she is one of the lucky ones--a child who has escaped death by slow starvation in North Korea. Now she approaches foreigners, usually tourists from South Korea, as they take photographs from the Chinese side of a bridge across the Tumen River between China and North Korea. Her father died several years ago, probably from starvation, she says. Her sister drowned trying to cross the river. She tries not to think about her mother, now dying slowly of malnutrition. "What's the use?" she asks.

Kim typifies the North Korean children one encounters these days in almost any city or town in northeastern China. Unlike North Korean adults, who prefer to hide for fear of harsh punishment at home, the children count on their eager smiles and heartrending stories to elicit sympathy from local Korean-Chinese, who sometimes offer clothing and shelter. They also embody the bigger questions that nobody seems to hear: What is the world doing to help them and the families they left behind? And why are we dealing with the government that makes them suffer?

The United States and North Korea last week reached a deal under which the North will permit inspections of a cave for signs of nuclear development, in return for several hundred thousand tons of food aid. But will that do anything for these kids? The answer is almost certainly no. The aid may have quite the opposite effect: perpetuating a terrible dictatorship that has executed untold thousands of its people, sent other thousands to prison camps from which death is the only escape and brutalized millions more. The record of deliberate suffering inflicted by North Korean leaders parallels the deaths by starvation and rampant disease caused largely by the regime's rigid self-isolation and economic stupidity.

The government of hereditary leader Kim Jong Il, however, has come up with a terrific gimmick for ensuring a steady supply of food for its 2-million-man military establishment and the privileged class of a few million more deemed loyal enough to share the bounty of Western aid. That is simply to wave the threat of nuclear-weapons development while demanding ever larger payoffs to stop it. Pyongyang followed that policy before agreeing at Geneva in 1994 to stop processing uranium for nuclear warheads. The U.S. had to persuade leaders in Tokyo, Seoul and Beijing to contribute to the construction of nuclear-energy facilities. Washington, meanwhile, is shipping heavy oil to help the North meet its energy needs. Since the signing of the Geneva framework agreement, however, the North's agony has deepened. Deaths by starvation, disease and execution have climbed sharply in the past couple of years, according to those who have fled across the border to China. The worse the suffering, the deeper the cruelty of a regime that knows no other way to guarantee its security than to torture its own people while engaging in nuclear blackmail with the rest of the world.

South Korea under President Kim Dae Jung has played into the hands of Pyongyang with its "sunshine policy" of engagement, in which Seoul authorizes not only tourism but also large-scale investment. Thus Kim hopes to lower the level of confrontation and, gradually, persuade the North to open up to normal trade, commerce and communication with the South. This policy, like the agreement on inspections of the suspect cave or the Geneva framework, will do nothing to solve the basic problem: how to get rid of a regime whose crimes may by now have matched those of Pol Pot's Cambodia. At this stage, the effect of any agreement with Pyongyang is to prolong the survival of leaders left with no other source of support. Their Russian and Chinese benefactors began demanding payment for goods in hard cash nearly 10 years ago.

The North Korean children on the Chinese side of the Tumen River have never seen any of the food the U.S., China, South Korea and others ship to North Korea. They say they have seen many people executed, often for stealing in order to survive, but were too hungry to worry much about what they had witnessed. Yoo Sung Eun, just 1.37 m tall at age 16, grins as he imitates the response of a condemned man he witnessed before the firing squad. "First the man stares at the riflemen in front of him," says Yoo, whose teacher led his entire class to watch. "Then when the guard yells, 'Fire,' the man closes his eyes. Then his head snaps back when the bullet hits him."

Kim Yun recalls the day when a child wrote DEATH TO KIM JONG IL on a wall by a toilet at school. "They had a long investigation," she says. "The child and his whole family were sent to prison." Further down the river, big characters in Korean lettering, painted white on the side of a hill, read, LET'S BRIGHTEN THE YOUTH BY LIGHTING UP KIM JONG IL'S ERA. The sign reflects a cynicism matched only by that of policymakers in Seoul and Washington who think they can appease Pyongyang by providing the food and power it needs to go on murdering its own people.

Donald Kirk is an author and journalist in Seoul 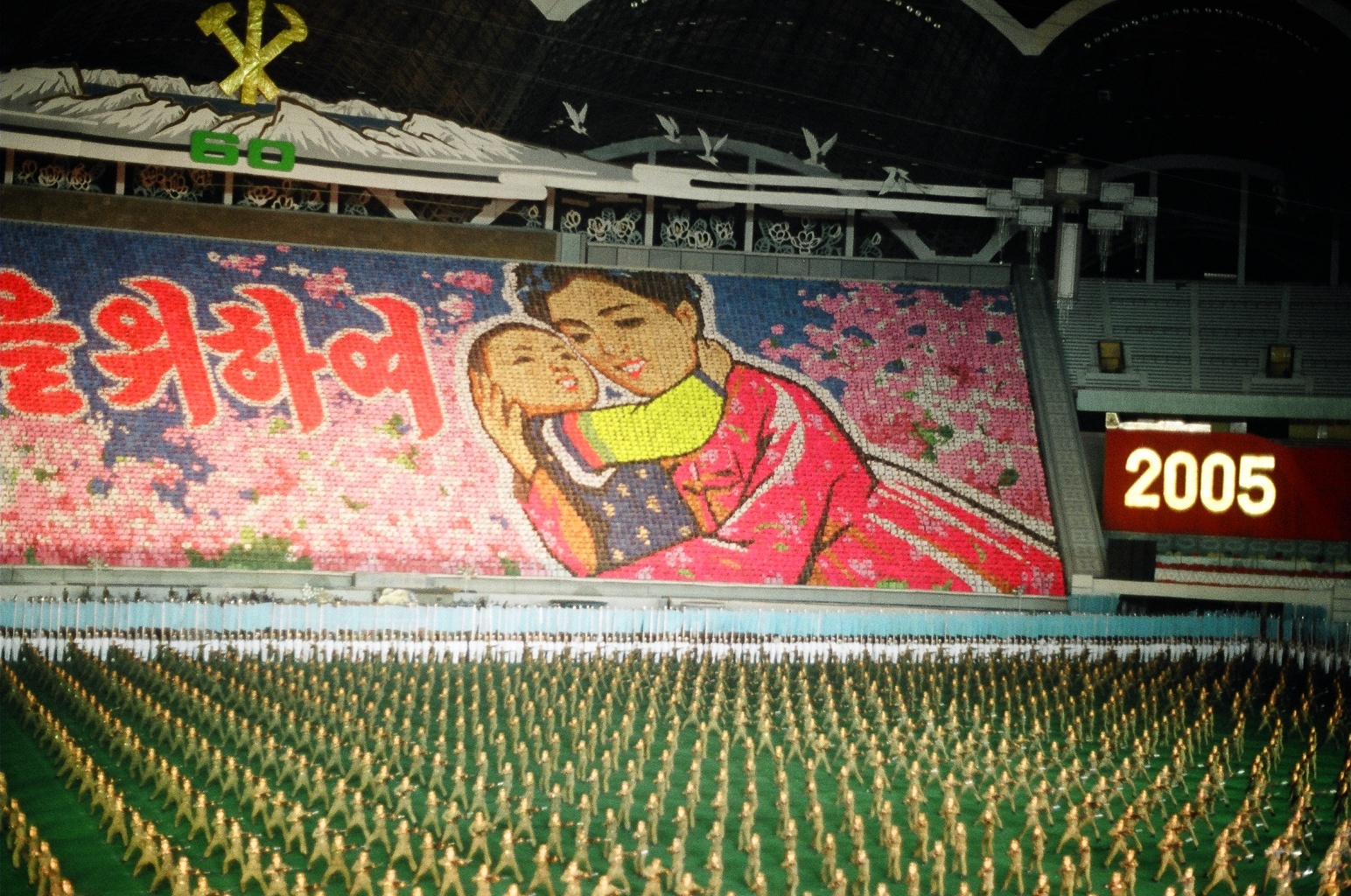 At the Arirang Festival in Pyongyang's May First Stadium, 50,000 kids in the stands flash cards and thousands more dance on the field depicting the happy lives they owe to Father Kim Il Sung and Son Kim Jong Il 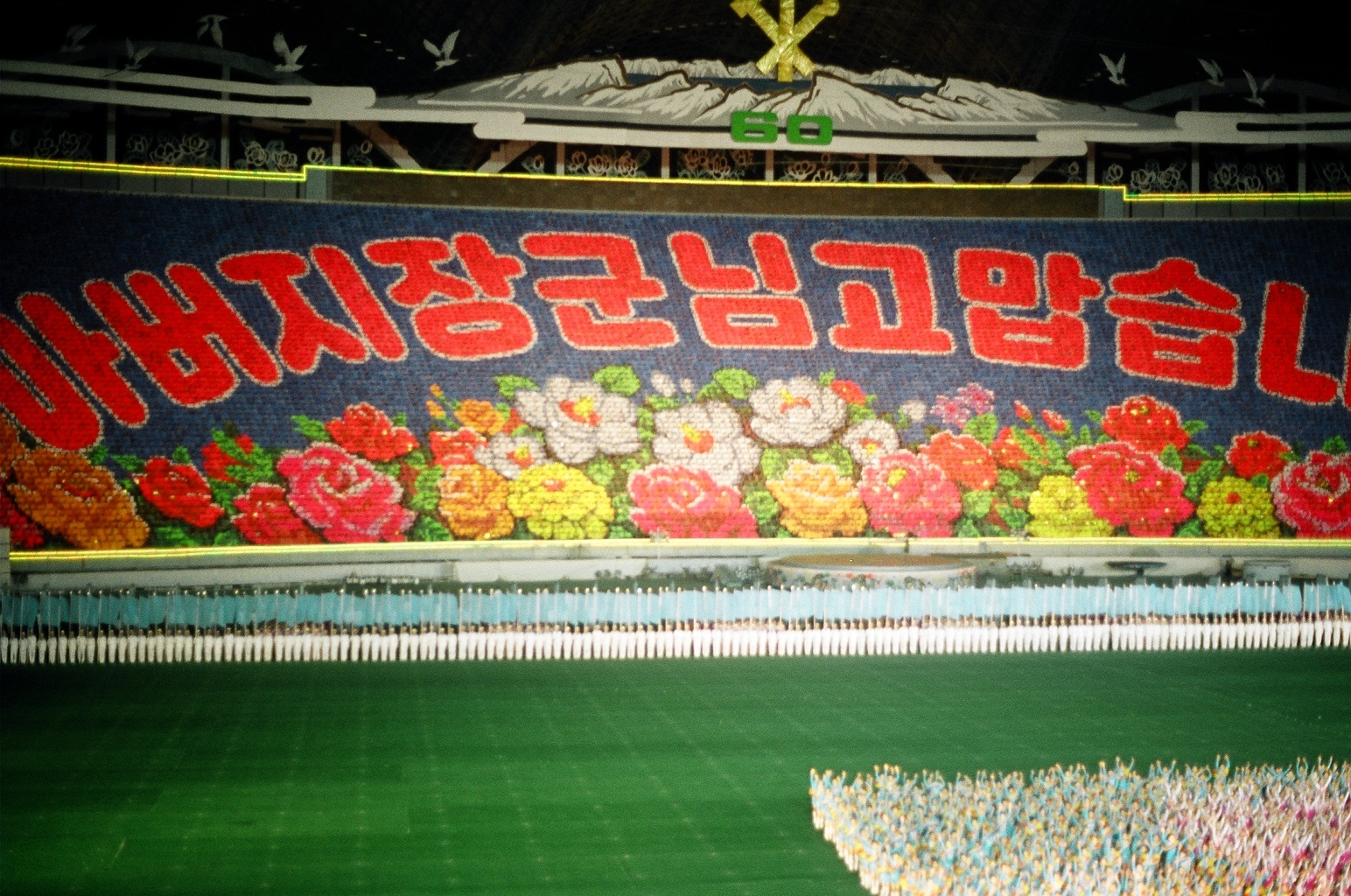 "Thank you, Kim Jong Il," over a floral offering 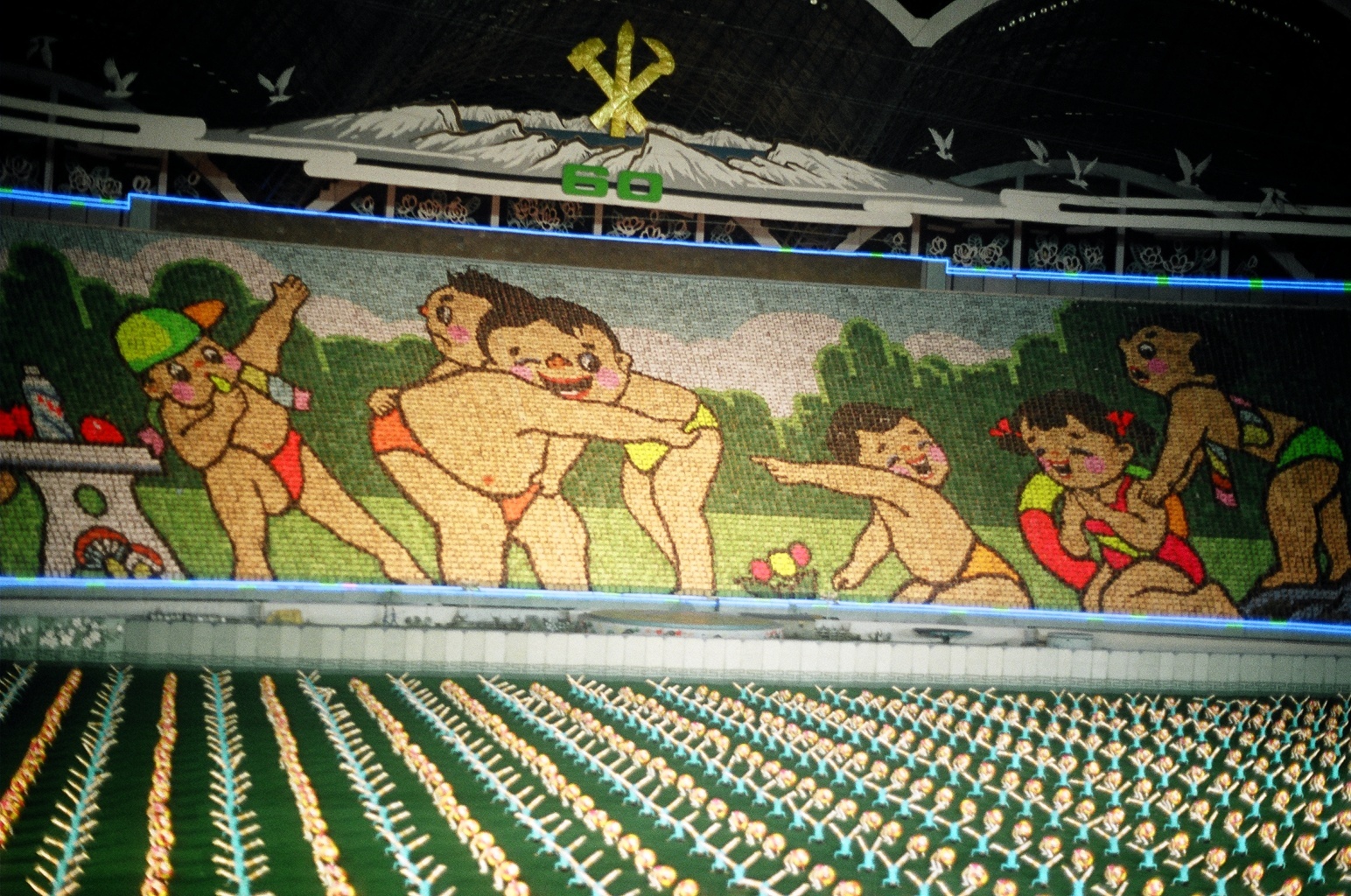 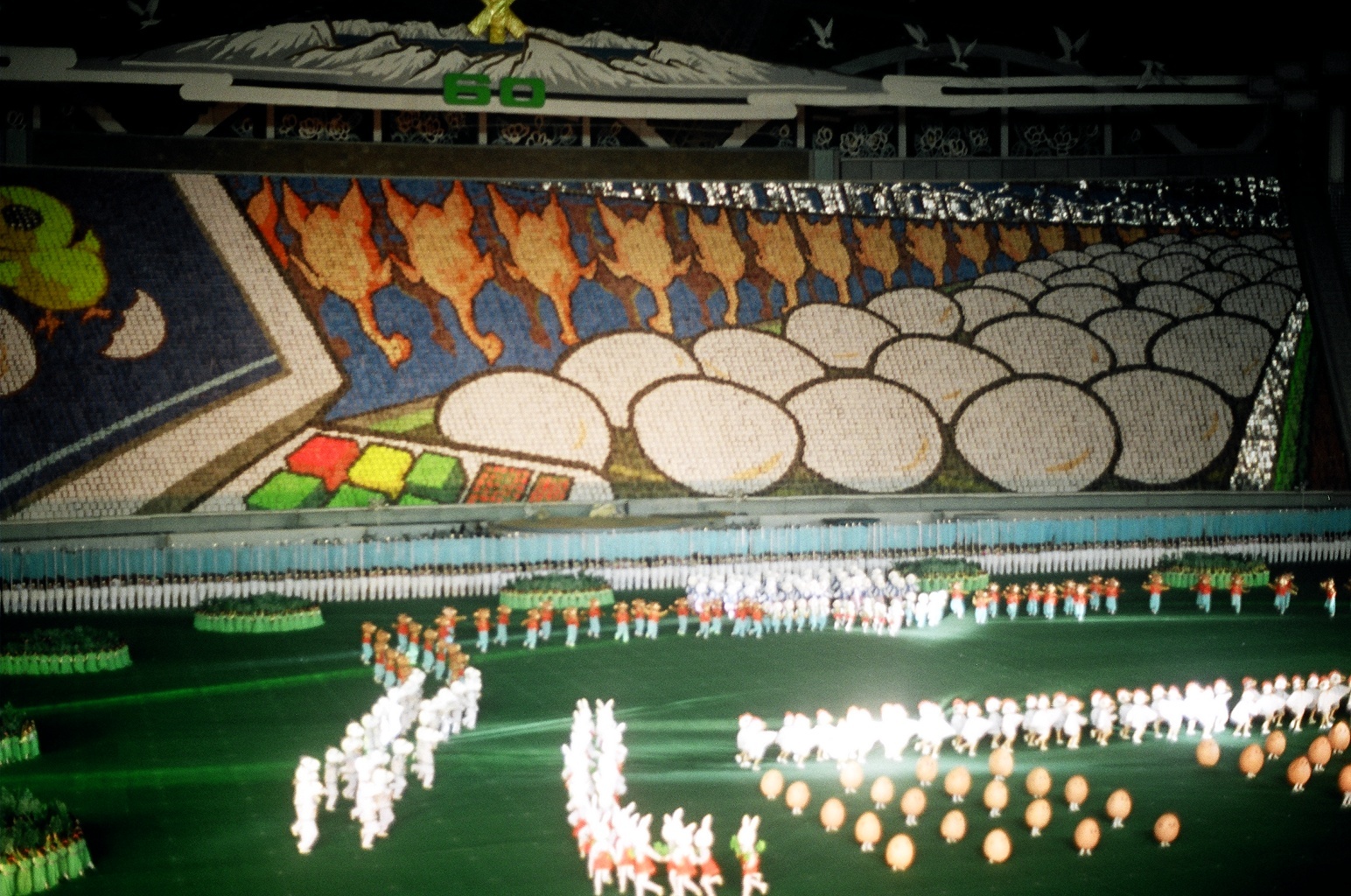 Chickens and eggs, in the stand and on the turf 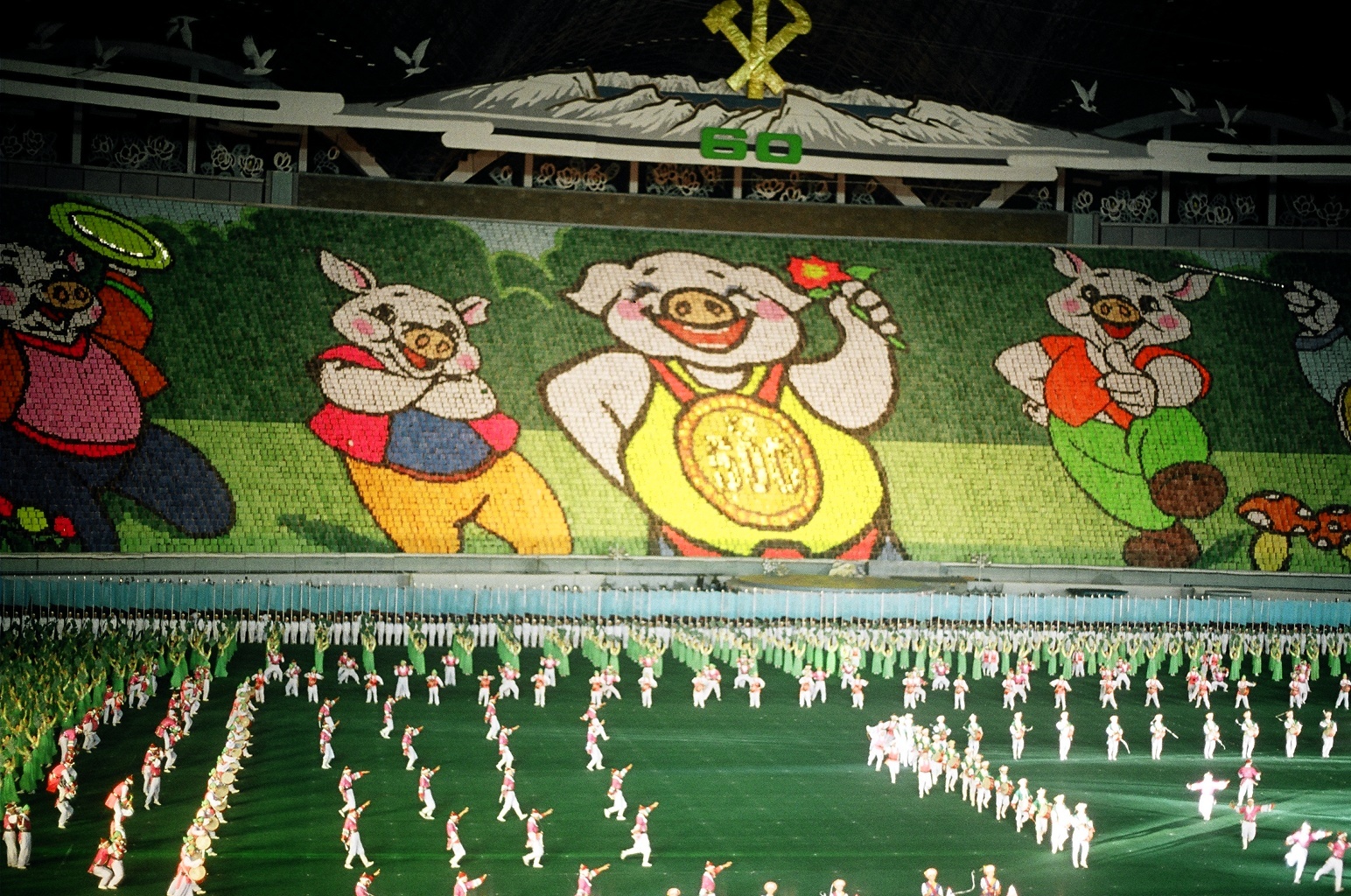 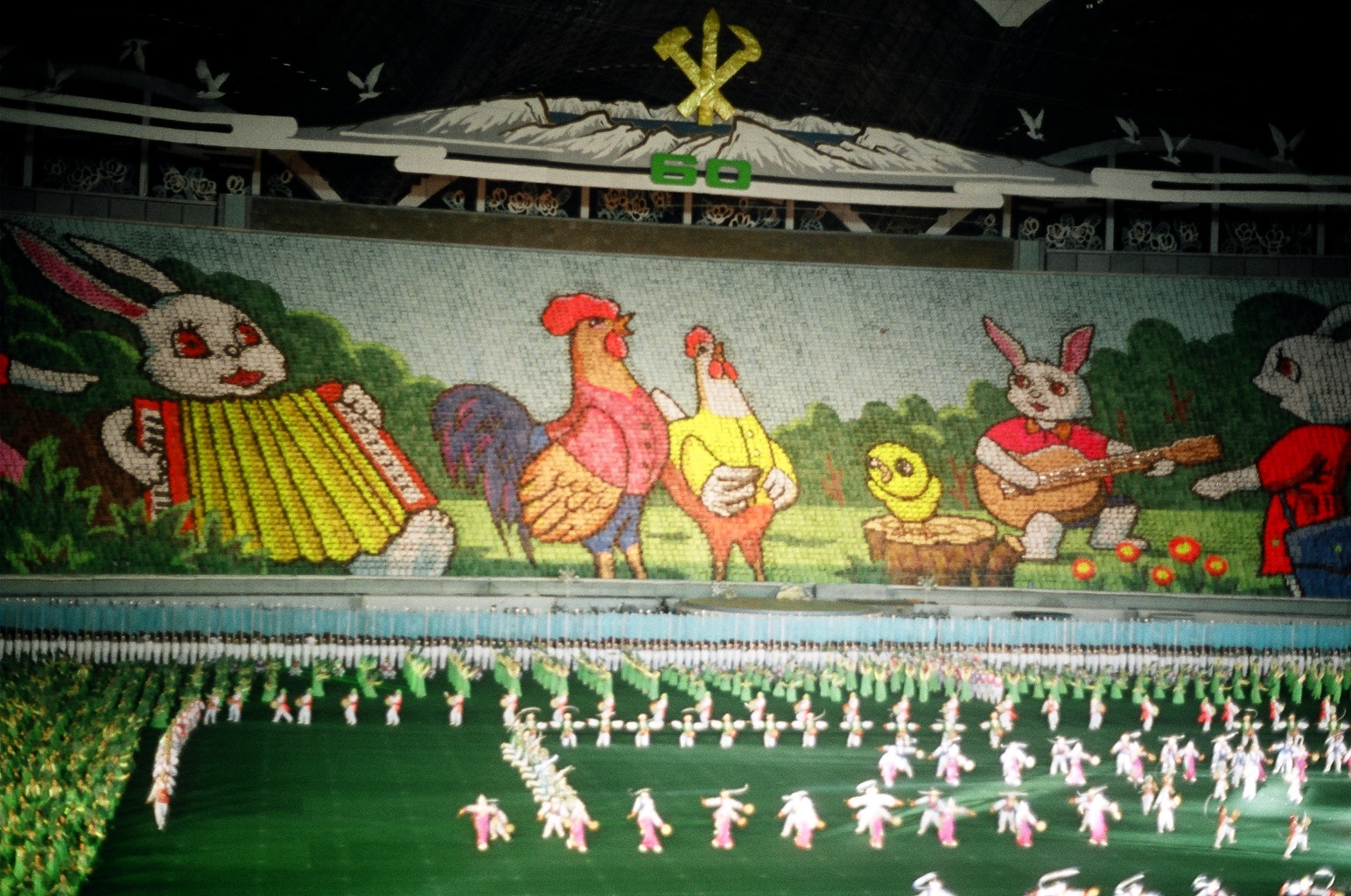 Fat chicks preening in a land of milk and honey 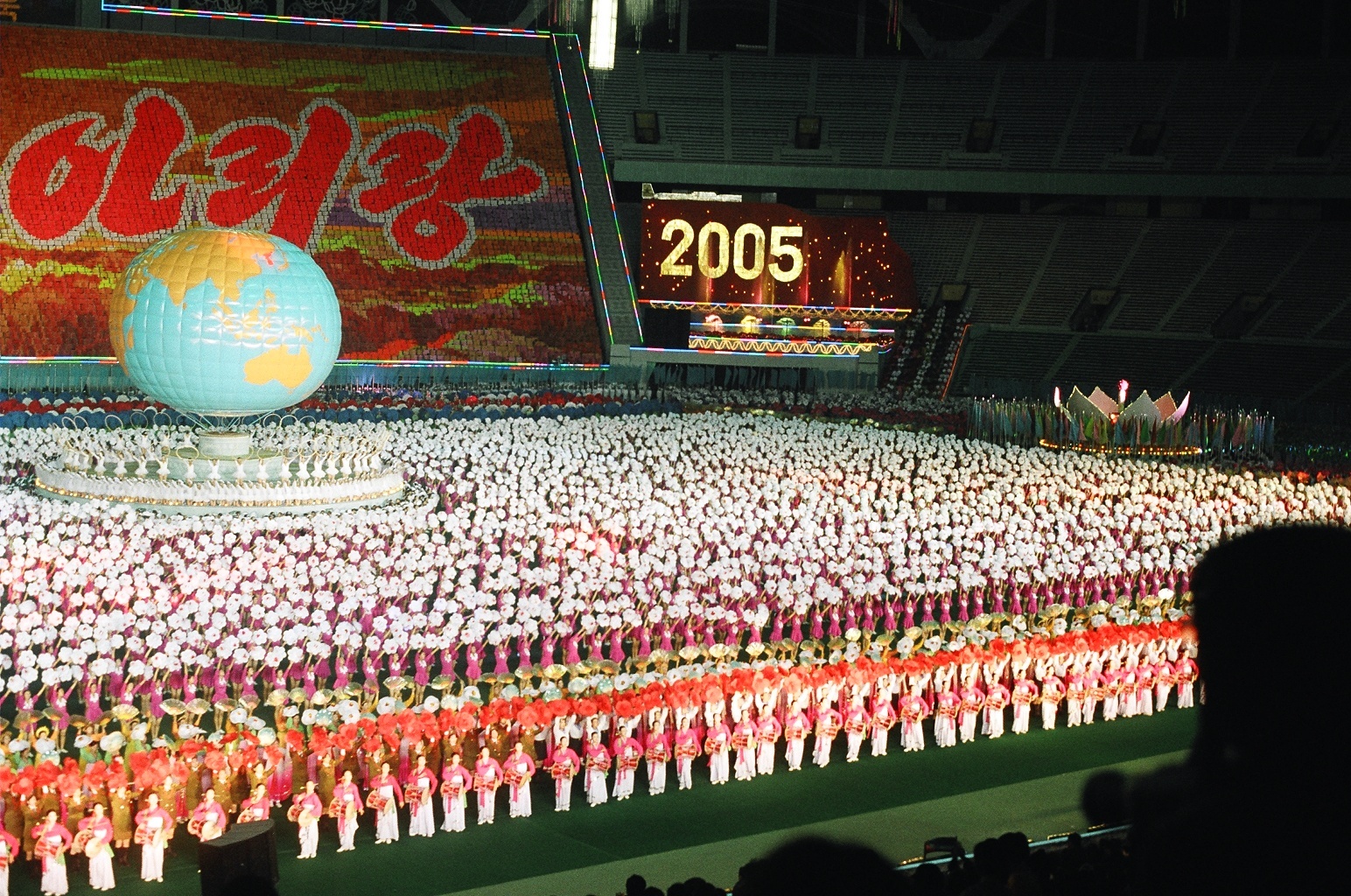 "Arirang," knowing oneself, a song that tugs at Korean heartstrings, flashes over the world as dancers mass

...AND FACES
OF HUNGER 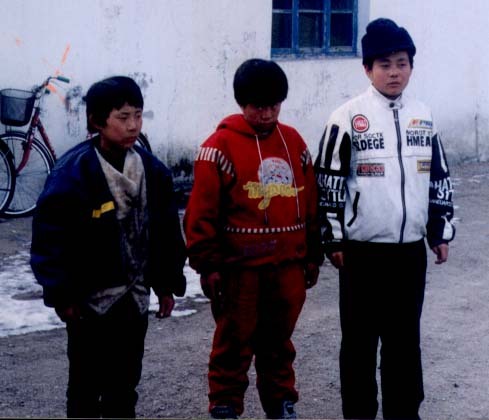 Three North Korean kids at Yangji, China, near North Korean border. They look like children but are all teen-agers. ©DON KIRK PHOTO

A starving North Korean boy. The image was captured secretly on videotape and distributed widely. It appeared with this article in Time Asia.
Loading…}